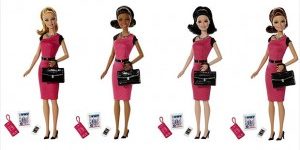 In her history, Barbie has had over 150 careers.

And this week, Mattel unveiled her career of 2014 – entrepreneur. And here’s ‘entrepreneur Barbie’, dressed in a neon pink dress and carrying her own smart phone and tablet.

‘We always try to make career Barbie a reflection of the times,’ Mattel spokeswoman Michelle Chidoni said. ‘Women entrepreneurs are more prevalent now and they’re growing in number. It’s a great way to encourage girls to also learn about this role.’Now, I’m not convinced Michelle Chidoni fully understands the role of ‘entrepreneur’ herself (any entrepreneur knows this is not a ‘role’ that can be clearly defined and learned about in the way most ‘roles’ can be) but one thing I do know is that I’ve long wished that the child me could have known at least some of what the adult me now knows about business.

At the very least, I wish I’d known as a child and teenager that I could become an entrepreneur, and that becoming an entrepreneur would give me power over my life.

I then wouldn’t have experienced what we so many of us feel when we transition from being employed to self employed, and that is absolute heart-stopping fear and terror at the thought of having to create an income from scratch. Instead, I would have felt confident in my ability to create any life I wanted.

Today, I see business and money making opportunities everywhere I go. My mind never stops churning with all the different things one can do to make money, and I wish I had 100 lifetimes to live so I could try them all. I believe in myself, and my ability to make money so strongly, that I know that no matter what happens to any of my businesses, I will be able to create another equally, if not more, successful one.

Imagine how much more success, happiness and confidence we’d have in the world if we all walked around knowing this, instead of feeling trapped by niceties such as paid holidays, company cars and annual wage increases.

She’s not the perfect entrepreneur, but….

Ok so ‘entrepreneur Barbie’ might have faults. We don’t know what sort of entrepreneur she is for a start (and do Mattel I wonder?) and perhaps the emphasis is more on glamour than profit, but if she gets little girls asking the questions ‘What is an entrepreneur’ and ‘Could I be an entrepreneur too’ then that is only a good thing. She’ll quickly grow up to learn that entrepreneurs don’t always dress in neon pink, but she might also grow up with a belief that she is in charge of her own destiny, and she, through business success and a determination to be self-sufficient, she can create the sort of life she dreams about.

Speaking of Barbie, a must-read book is Robin Gerber’s Barbie & Ruth, a biography of Ruth Handler, the woman (and mum) who created Barbie in the 1950s (as well as other toys that are still going strong today, such as Hot Wheels cars). It is incredible to think that what is now a globally recognised and loved product started as an idea in one mother’s head (whilst watching the way her daughter played). It’s a great book! Get it, read it.