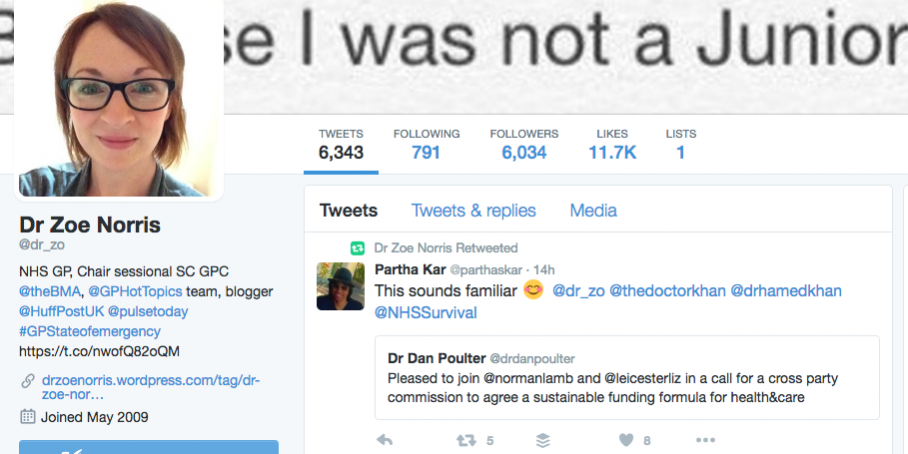 I’d like to tell you a story about Dr Zoe Norris, a GP in East Yorkshire. You might know of Dr Norris from the Channel 4 series ‘NHS £2 Billion A Week & Counting’ and also her appearances on Newsnight, BBC Breakfast, Radio 5 live and local radio. She speaks as a voice for the staff and patients who work for and use the NHS daily and know the reality of the current health service.

The question is, why Zoe?

Why, out of the hundreds of thousands of GPs in the UK, has she ended up building a personal brand that has lead to be becoming a spokesperson for her industry and the NHS?

And the answer is her opinion

And in particular sharing her opinion on a platform that reaches millions of people. Zoe Norris is a regular blogger on the Huffington Post, where her articles include ‘The NHS wars, who is to blame’ and ‘Why I don’t want a 7 day NHS treating my family’.

She started blogging because she felt passionately about what was happening to the NHS; and everything she writes is personal and thought provoking but also strikes a chord with patients and doctors alike. And through writing regularly, passionately and in a language everyone can understand, and on a huge global platform, she has not only raised public awareness of the issues she knows about but has been picked out by TV producers who want her opinions; and thus she has become a spokesperson and leader in her industry.

Using your opinion to build your profile and personal brand is also known as thought-leadership.

If ever I’m talking to a client, and they want to be promoted but aren’t ‘famous’ or ‘notable’ enough to immediately secure them interviews with media outlets, thought leadership is the next best thing. It allows you to build a profile slowly but surely, and attracts the media as you do so.

If you have an opinion and you can get it out there in a sustained and consistent way, then cross-posting the content you create for your own blog onto a platform like the Huffington Post can make a huge difference to your reach, authority and the way others perceive you. The reason journalists like Zoe and she then gets invited onto their shows as a commentator is because her opinion articles do all of the following

Most niches have large news-style websites (such as Forbes, Entrepreneur and Lifehack) that allow other people to contribute; and your opinions and willingness to share them and lead your industry help make you distinctive.

Opinions are just that, opinions, not fact

But, well-presented and articulated within a balanced argument, they are worthy of sharing. And your opinions will define you, power your personal brand and can both bring you publicity and make it easier to get publicity.