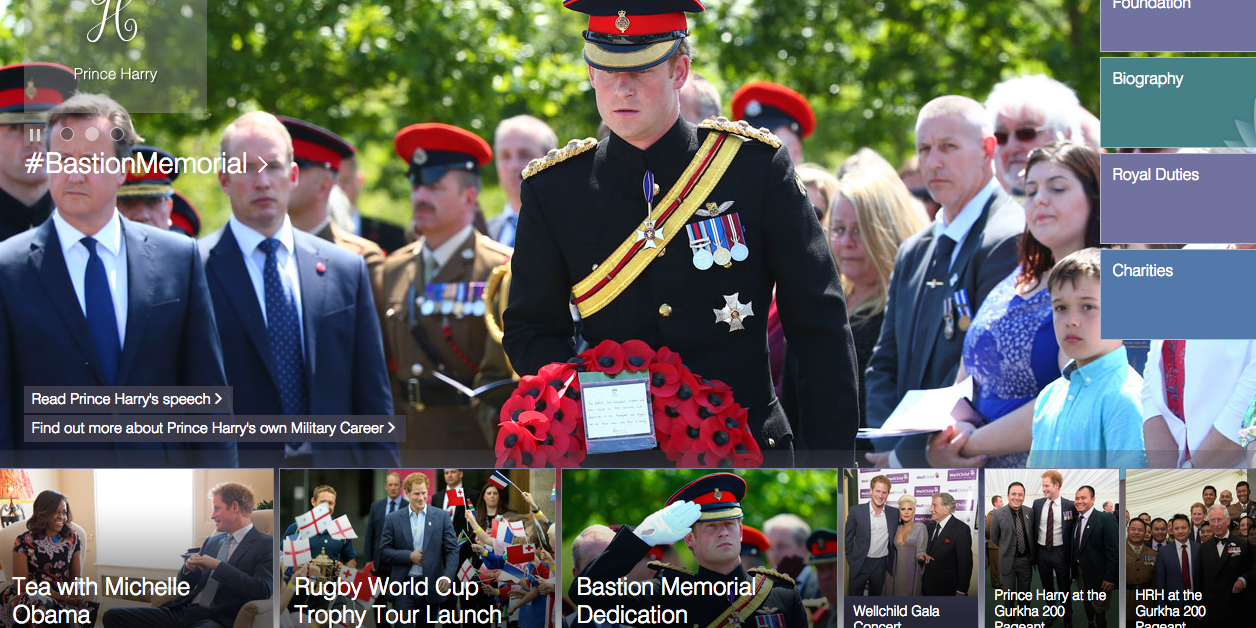 Ever since I sold my online news agency in 2014, and started thinking how I could bring together my particular combination of expertise in digital, websites, journalism and publicity, I have become obsessed with the potential that well-known individuals have to use the internet and their websites (coupled with editorial skills) to not only engage with their own fans, but also guide the press and at the best, create their own publicity.

And nowhere is this modern publicity model, which is really a form of content marketing, in clearer action in this country than on the websites of Prince Charles, Prince Harry and Prince William. They are not always know for being forward thinking, but hats off to the royal family who are streets ahead on this new digital trend.

Prince Charles and his family have what the media describe as a ‘content rich’ life. Every day is full of potential stories that would be of interest to the press and the public.

And of course, the royal family are often accompanied by reporters and photographers who can turn their daily activities into news and feed it back to the publications and news outlets they work for. But what if the journalists miss out the particular angle you’d like to promote? What if they see the story slightly differently or get their facts wrong?

In this age when everyone is a publisher, and online publications churn through content at the speed of light, happily reproducing content that has already appeared elsewhere just because their vast websites need filling up hour after hour after hour, the royals can either be powerless and hope that journalists pick up on the particular elements of their content-rich life that they’d like them to, or they can wield the power of content marketing, create their own news, complete with pictures and then release it.

The benefits of the latter are two fold. Firstly it ensures those individuals genuinely interested in the royal family, those googling Prince Charles, Harry and William, are greeted with a fantastic updated showcase with plenty to read and look at. Secondly, it enables the royal family to effectively create their own publicity.

If a monster has been created (which it has particularly in terms of online publications, requiring endless content), then why not feed that monster?

When you visit the websites of Prince Charles, Harry and William, it appears that every event they attend turned into its own news story (written just as a newspaper would write it) with accompanying pictures. From a publisher’s point of view, especially in this post-Levenson age, this is a dream come true, it’s either free or very low cost, with no potential risk of any errors seeing is it has come straight from the horse’s mouth. From the point of view of the royal family, it doesn’t really matter which bits of content are used as the result is an endless stream of publicity, all completely on message.

Let’s have a look at Prince Harry’s website. A recent story is about Prince Harry having tea with Michelle Obama. Published in 3rd person, with a nice photograph, and it goes like this…

Prince Harry was very pleased to host The First Lady of the United States Mrs Michelle Obama for tea at Kensington Palace this morning. They discussed their shared interest in support for veterans and their families. His Royal Highness was also interested to hear from the First Lady about the Let Girls Learn initiative to further adolescent girls’ education around the world, which is the focus of her visit to the United Kingdom.

Any news outlet is free to use this story with its pictures and fill their pages with what their readers will think is a great news story about Prince Harry. And have they done?

Yup, the Mail, People, USmagazine, Independent, have all run the story about Prince Harry and Michelle Obama pretty much exactly as it was written by the Palace. There would never have been enough space to let all those journalists in the room, but through using their website and creating the content, the result is the Palace have enabled that story tonbe churned around the globe.

Here we have another example. The Palace published this story about Prince Harry attending a service of dedication for the Bastion Memorial along with a nice photo.

And here’s where that story ended up: the BBC, Daily Mail, Telegraph, Hello and numerous local others. It doesn’t even matter if it was only used by the online versions of these publications as the increasing numbers of people read the news online, plus there is a chance of greater reach through social shares.

Of course, there are many ways in which publicity can be done. I still believe there is plenty of room for sit-down interviews, allowing journalists to accompany you and write about you and pitching specific articles/stories and lines to specific journalists and publications.

But perhaps in time, these traditional methods could seem old fashioned. As result of the digital revolution, the internet has created a new route to publicity for those who are well known, and that is to create your own content and share it to the media. If the digital age has created a monster, then why shouldn’t well-known people with content rich lives feed it?

Here is some of the success I’ve had with Sky newsreader Samantha Simmonds using content to create publicity.