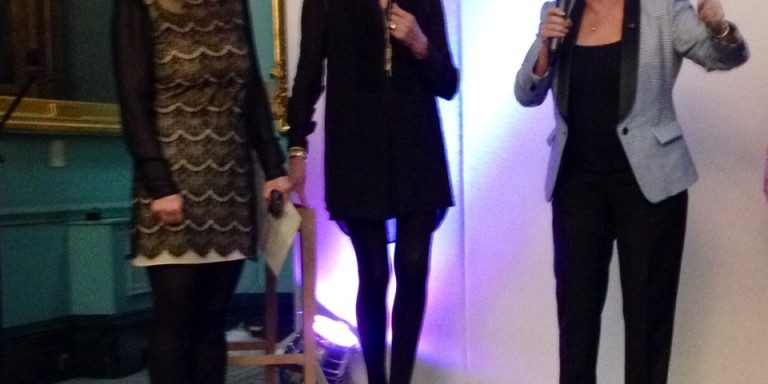 She’s one of the UK’s most famous business women

Recently, I was lucky enough to get to spend the evening with the likes of Debbie Moore, Lucinda Ellery, Iain Duncan-Smith, Katie Piper, Barbara Windsor and Gloria Huniford at a Women in Business event hosted by the Right Honourable Esther McVey, Minister for Employment. It took place at the Institute of Directors on Pall Mall.

And there I learned Debbie Moore’s personal motto: ‘Nothing Good Comes Easy’ (even when you’re gorgeous and glamourous like she is!)

Debbie Moore (pictured at the event with Barbara Windsor and Esther McVey) founded Pineapple Dance Studios in 1979, in an old pineapple warehouse in Covent Garden.

At the time, she was suffering from a broken heart as her husband had left her for a younger woman (Debbie was 21, the other woman was 19).

As a result of the heartbreak, she’d gained weight, which was in turn affecting her career as a model. The doctor told her to exercise, and when she said she hated exercise, he asked her ‘Can you think of any form of exercise you enjoy doing – at all?’ She replied ‘Dance’ and Pineapple Dance Studios was formed.

Her aim was to make dance accessible to everyone because, and her motto became ‘To dance is to live.’ And you should see the dancer’s legs on her! I could only wish my legs were that slim and long.

Pineapple Dance Studios went onto be a  huge success. Soon afterwards, Debbie launched Pineapple’s clothing range in response to the demand for fashionable dancewear. She then became the first female Chairman to take her company public on the London Stock Exchange when Pineapple became a public company in 1982, famously wearing leggings and a mini skirt as she did so. In 2009 Debbie Moore was awarded an OBE in the Queen’s New Year Honours List for services to business.

Debbie said that being gorgeous and glamorous has made it look, from the outside, as if her journey has been easy, but that her motto is ‘Nothing Good Comes Easy.’

So when you struggle with your business, and look at people like Debbie Moore (and she’s right, you could find yourself imagining it’s been so easy for her) remember the words she herself lives by.

Could you be next?

In other news from last night, it was simply staggering hearing the potential us women have for success! Did you know for instance, that ‘women’ are the world’s largest emerging economy, set to be more powerful than India and China? And that today, there are more young female millionaires than male millionaires for the first time in history.

By 2025, more wealth will sit with women than with men – and why shouldn’t the one of the women in possession of that wealth be you? Because many of the women who are set to become wealthy are going to be entrepreneurs, and directors of their own companies.