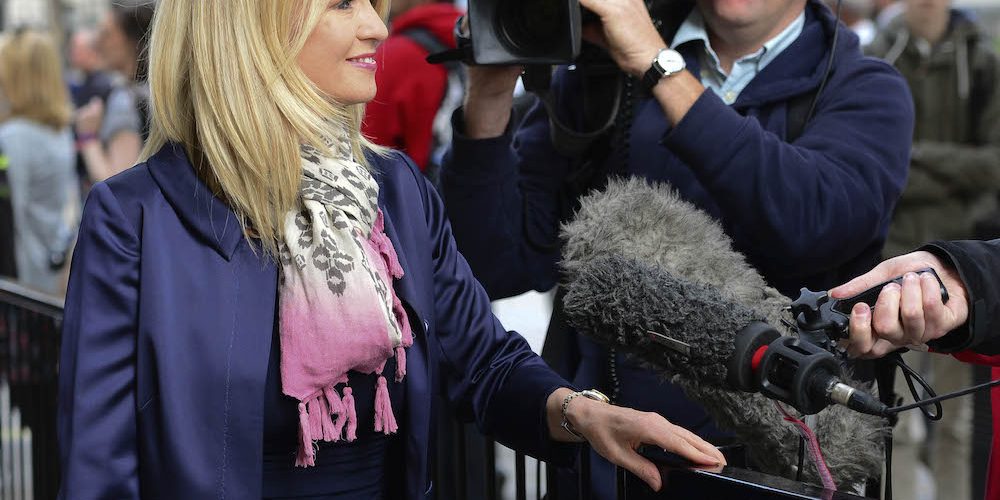 Today, I’d like to tell you a story about working with the former Minister of State for Employment, Esther McVey, whose brand new website and personal branding has just been set live.

I first met Esther many years ago when I was working at the Daily Mail newspaper, and was commissioned the most nightmare article I have ever been asked to do.

At the time, Rachel Hunter, had just posed nude but with a swimsuit featuring the map of the world body painted on her.

Everyone (as in the editor) went nuts about the photo and said ‘We must immediately recreate this image using 5 different celebrities and let’s ask Natasha to do it.’

And even worse, they wanted it to be published in two days time.

It was the most nightmare commission ever, and my colleague Alice was drafted in to help (we still joke about this today).

Panic striken, we hit the phones. Not only did we have to find the body painter, but we had to find FIVE celebrities who wanted a bit of quick publicity to get into a studio the next day, get naked, get body painted and help recreate these photos.

Now, somewhere along the way, I had got the phone number for Esther, who at the time was making the transition from TV presenter to politics. I thought (in desperation)

So I duly phoned her and said ‘Esther, will you be body painted, naked, tomorrow.’ And sensibly, she turned me down.

A few years later, I was at an event for female entrepreneurs and found myself sitting next to Esther.

By now, I was no longer working at the Mail and was running my own online press agency, and I thought ‘When I tell her I’m ex Daily Mail, she’ll remember this ridiculous request and I’ll have to confess it was me, so I might as well bite the bullet and tell her it was me from the off!

So after we introduced ourselves, I said, ‘erm, we have spoken before actually, I was the person from the Daily Mail who asked you to be body painted naked……’

Anyway, we got on brilliantly and have stayed in touch ever since, and I’ve watched Esther’s rise from where she was then to becoming Minister of State for employment with awe.

Last year though, Esther lost her seat as a local MP, and found herself at the centre of a rather vitriolic campaign which she’s written about on her blog here.

Anyway, soon after the events Esther talks about (imagine having fellow colleagues calling for you to be lynched), Esther lost her seat.

I guess we all know politics is brutal, but what does one do when change happens suddenly and you effectively have to pick up and start again.

Esther is a one woman powerhouse, having started and sold a business, been a TV presenter, a local MP, owning her own charity, inspiring thousands of school girls and of course being a MINISTER. There is no doubt Esther has plenty plenty plenty to offer.

The question is how to bring everything she has done, does and is into a single positioning and coherent message and mission.

Working with Esther, we concluded really it all came down to her passion for socio economic change and inspiring people that no matter where they are from, or who they are, they can achieve the goals.

We went for a high end and minimalist feel to the site and you can see the finished website here. I’d love to know what you think.