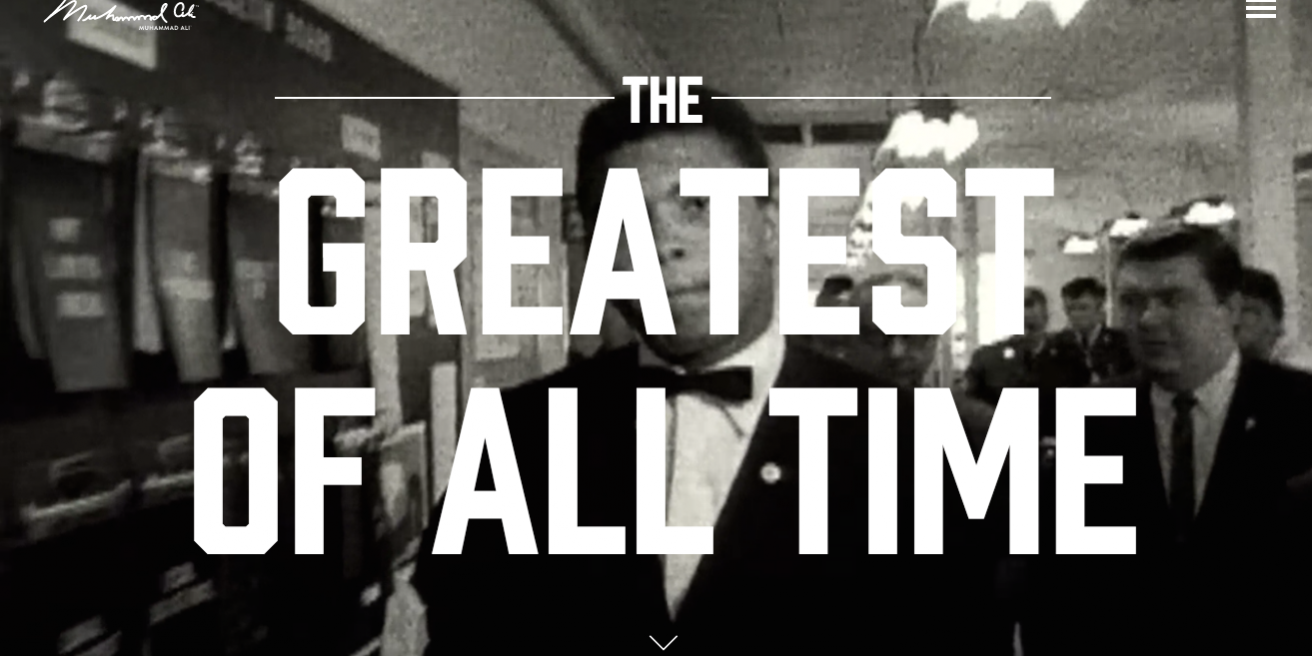 I can’t even imagine the excitement that Brooklyn based Frank Collective felt when they were tasked with building muhammedali.com by Authentic Brands Group, the New York brand development and licensing company.

But where would you even start with building a site that encapsulates, positions, and sells a man considered a legend around the globe?

Here are 4 things Frank Collective did that make this site stand out from the crowd, and scream out ‘Hero’ at first glance!

It would be impossible to choose one image that says it all about Muhammed Ali, so instead, Frank have opened with a video background featuring a series of in action, talking, black and white and slow motion clips of Ali. We all know pictures speak louder than wordsm and this series of moving images make you realise you are dealing with someone significant even before you’ve seen any of the site content.

Muhammed Ali became known for his boast that he was the greatest, and he became widely considered to be the greatest by many around. Overlaid over the video are the words ‘The Greatest Of All Time’. There’s no point beating around the bush with words. I love the way the site says it like it is and leaves visitors in no doubt about the importance of this man.

In time, we may look at this site and say, gosh that site is so August 2015. But for the time being, it combines the latest of web standards and hallmarks of a modern site, which include the already discussed video opener, transparent header that appears on scroll only, smooth scroll, offscreen menu with menu icon, full screen cover navigation (coming soon on the next site I am working on!), scroll down design, and grid elements. This site is the web equivalent of the current trend for #cleaneating, Sienna Miller’s ‘Lob’ or dungarees.

Bells and whistles and latest design will only take you so far – which is why this site is also full of compelling factual content that means even as design trends move on, the site will remain a clear authority on Muhammed Ali’s career and the place for those brands interested in collaborating with his name to make enquiries.

If I’d designed this site (and I didn’t!) I would have done all of the above – and hoped my end result was as good as theirs!