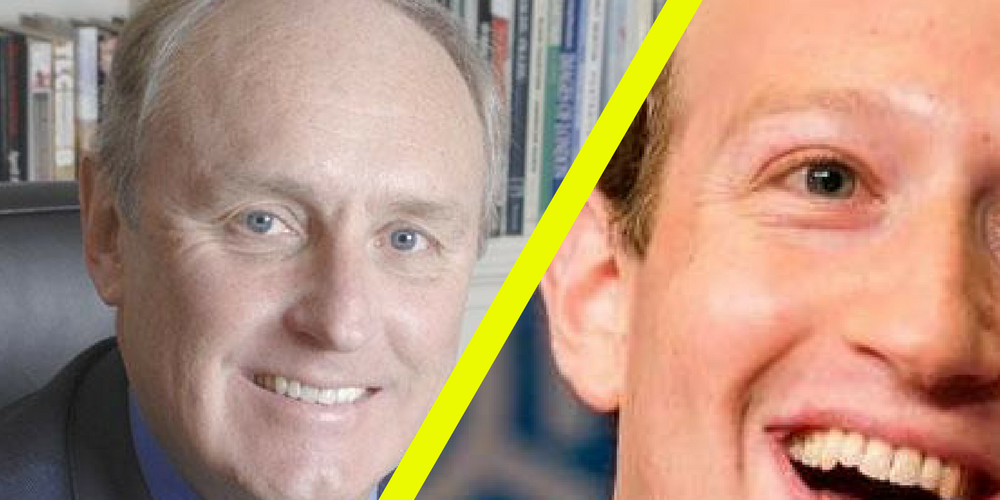 Coming from the traditional print media, I find the concept of what makes good content, and the meaning of ‘good’ fascinating and also highly bemusing.

You see the concept of ‘good’ is changing rapidly and the baton of decision is being passed with increasing pace from the ‘old school’ – the editors, the commissioners – to the new world, that of the actual, ahem, reader and consumer!

In the photo above you’ll see two men, one is my old boss Paul Dacre, the editor of the Daily Mail (I often use his photo in talks and many people don’t recognise him) and on the right is Mark Zuckerberg, who needs no introduction.

This is what happens when the shift of decision of what is ‘good’ changes.

In the old world, there are various people of power who through whatever reason ‘know’ what makes good content, and what their readers want. Their knowledge comes from experience, and talking with each other to decide on how to put messages across, and what is best for the reader, what the reader does or doesn’t need to know, or it may just come from luck, the luck of being in the right place at the right time and being appointed the oracle. Really though, some of these people only one way conversation with their readers. In the old days, readers would write in by post to let them know although their letters didn’t always reach those on high. Even in the modern world, in which the readers are able to comment on articles and openly criticise them, many in the old world chiefs don’t really care or change direction based on feedback because they believe that they know best. Which maybe they do. Or maybe they did.

Everyone and anyone is a publisher and a media company. Everyone and anyone has the ability to grow and audience and reach people in exactly the same way as traditional media have done for years. Some people are able to reach more people than even the big media outlets. The way anyone can reach an audience is through publishing (same as old media) but here’s the difference. They then need to ride on things like their analytics and insights tabs, and start assessing the weight of negative and positive feedback and then take action on it. By publishing more of what the audience tell them what they want (through likes/comments/shares/engagement). In the new world, you publish, wait, assess and then do more of what your audience feedback to you is ‘good.’ It’s not a one way conversation.

What I’ve learned the new world is actually, it doesn’t matter what I think, or what you think about what makes good content.

I just love the democratisation of it, the slow but steady reversal of assessment of what is good from those who think they know to those who actually consume.