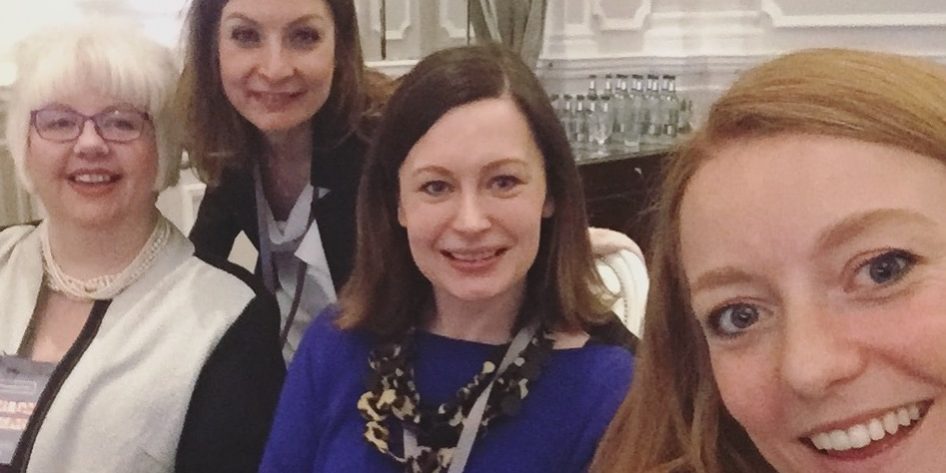 Today, I attended the launch of Facebook’s #shemeansbusiness campaign. The whole idea behind it is that when women succeed, we all win.

And the campaign, which is partnering with Enterprise Nation, aims to train 10,000 women in Facebook For Business skills in 2017.

And there’s an extra special reason this was exciting

I’ve been invited by Facebook to become one of the very first eight people in the UK to become official accredited ‘Facebook for Business’ trainers.

On Wednesday, I’m flying to Dublin to go to Facebook HQ, where I’ll spend two days learning from the people who actually know exactly how Facebook works, and then I’ll be helping deliver this training to 10,000 women this year.

I’m not massively in to thinking about gender divides when it comes to small business.

I tend to think that you are either into entrepreneurship or not, but the figures presented by Facebook this morning are pretty compelling.

There are 5.4 million small businesses in the UK, and only ⅕ of them are set up by women.

In the US, one third of businesses are set up by women. America still lags behind in terms of the gender diversity of their population, but we are lagging even further behind.

Last year, Facebook surveyed thousands of women and asked them why they weren’t setting up their own businesses.

And the answers were that 3 out of 4 women said they wouldn’t set up a business for a number of clear reasons, the first being lack of confidence, fearing a lack of credibility (listen, I heard today that even Nicola Mendleson, the VP of EMAE at Facebook in the UK experiences imposter syndrome and if she does, then it’s not so bad if the rest of us do right?!) and finally not knowing how they will balance the business with their family.

The other presiding reason that women don’t set up businesses is that they feel they lack the skills, particularly online skills, that they need for that business to be successful.

Over half of the women identified online marketing and tech skills as areas they knew they needed to improve, but they didn’t know how or where to turn.

Now I’m an official Facebook trainer, I am going to casually wear this pen on my ear…..

So it’s Facebook to the rescue with their #SheMeansBusiness campaign which will empower 10,000 women across the UK with the skills they need to use Facebook and online marketing to build their businesses

Today, one of the women there asked me how I’ve done it – as in set up a business, make it work, sell a business, have two children and set up the business I have now. I always feel slightly uncomfortable when people ask me that as I am not entirely sure of the answer and I also think I could have/should have done so much more!

I definitely have not been naturally or genetically fuelled by the things that the women Facebook surveyed identified as feeling without, such tons of confidence. I am not sure I have done an amazing job of the ‘juggle’ of work and family and just try and do the best I can like every other working mum. I sometimes feel like imposter but I am fairly philosophical about that and recognise its something a lot of people feel so I carry on regardless.

I strongly believe that out of all the things that hold us back, tech can be learned. If someone had said to me even a few years ago that I would be building and launching websites, I would have laughed. Yes, I was running an online business that was entirely SEO dependent then so I knew something about websites, but building them, no way. I would have thought it beyond me.

But I took myself down to the local college and learned how to build them alongside a bunch of 21 year olds. Same with video production and editing, and graphics. I just learned how to do it. It wasn’t easy but it wasn’t impossible either.

Just this week I needed to use the sound editing software Audacity.

I thought to myself ‘It will be like iMovie, it will be easy’ (note to self, two years ago I never would have described any video editing software as ‘easy’).

Anyway, I downloaded Audacity. I opened it. And arrgh. It wasn’t like iMovie. I couldn’t work it straight away. I hated it. It’s layout looked stupid. There was nothing intuitive about it. It made me cross, really cross. I started Googling other sound editing alternatives and was just about to delete Audacity from my laptop.

Then I thought, ‘Hang on there are tons of people who use Audacity and they are not all brain surgeons. I must be able to understand it.’ I went to Youtube to watch videos. Literally 15 minutes later I edited my first audio track, cutting out problems, adding in music and even fading the music in and out! It was learnable.

Don’t let fear of technology hold you back

I see technology and not understanding how to do things from update a website to resize an image to editing a video holding so many of my clients back. I’m passionate about showing that it is all learnable but you can’t learn it without effort and discomfort, and huge amounts of irritation as I went through with Audacity.

Yes, there is new vocabulary, and lots of buttons, and data overload and moments when everything crashes and nothing makes sense. But none of it is life threatening, it’s all fixable and it’s all learnable.

That’s why I’m so excited to be a part of Facebook’s journey as they move into strategically demystifying how to use the platform for business. I’ll keep you posted on how the trip goes.