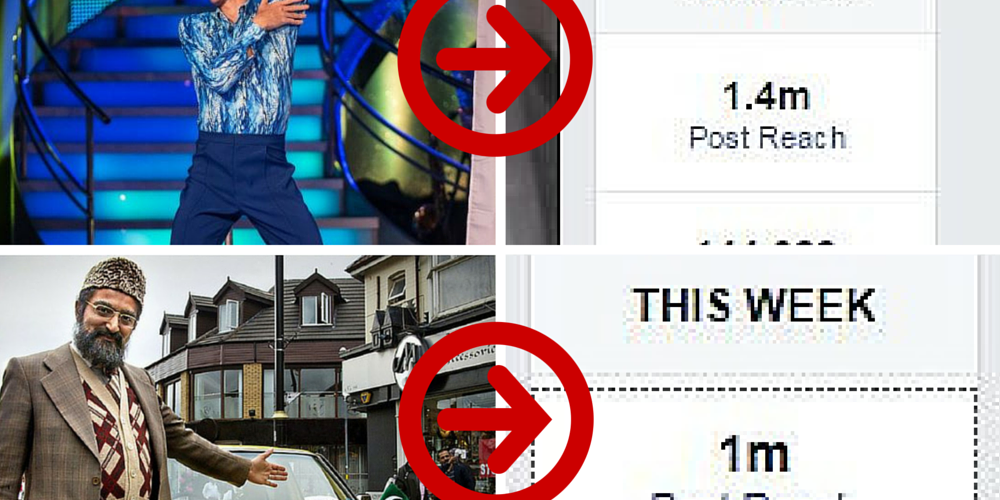 It’s a very happy day when two FB pages I have been working on reach over 1 million people – each.

First up, is Jeremy Vine’s FB page which I started for him around 2 months ago and has since built up to 12k likes. We have been running an average reach of 10x our likes, which is pretty good, and we’ve achieved that by doing all the things that Facebook recommends (it’s all to do with creating content that people engage with, and an emphasis on native video).

This week, as of right now, his page has reached 1.4 million people, so 140 times page likes – which is staggering- and it’s all been triggered by this video of Jeremy talking to some of his haters. WATCH VIDEO

The video has gone completely viral, and had thousands of likes, shares and comments. And, not only has it also been picked up by numerous news outlets, including the Daily Mail, thus enabling Jeremy to create his own publicity, but as it is STILL getting likes, comments and shares, the overall reach of Jeremy’s page is continuing to grow.

Next, it’s the FB page for the BBC sitcom Citizen Khan. I’ve been advising the show’s creator and star, Adil Ray (whose website I built earlier this year) on his FB strategy and thanks to a run of native videos posted over the past few days, the reach has dramatically increased. With his show starting tonight, Adil can reach his most engaged and important audience, those people who have put their hands up and said ‘We love this show’ by liking his page. Let’s hope for big viewing figures tonight!