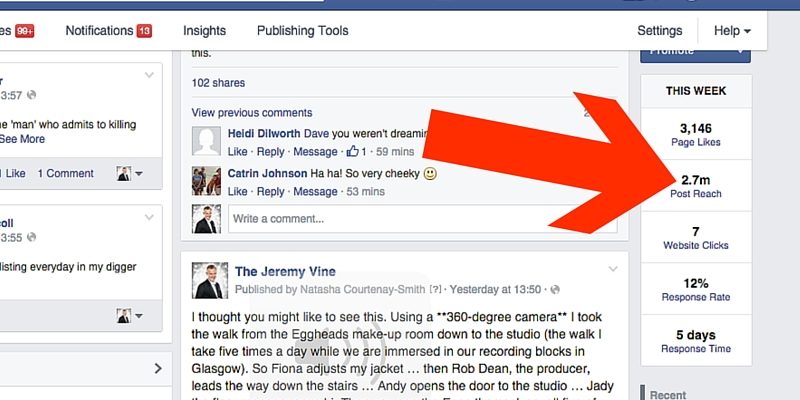 When I started working with Jeremy Vine in July 2015, he didn’t really use Facebook personally, had no Facebook page and didn’t really get how FB could work for him in terms of engaging with his fans. He was starting literally from zero.

That is quite staggering as generally FB organic reach has dropped as FB pushes brands and people to pay for advertising. In fact, a study by Locowise last year found that the average organic reach of a page is now just 7% of likes. Which means that out of 30,000 likes, Jeremy’s content would normally just reach 2100 people. Yet it is reaching 2 and a half million….. So how is he doing it?

First, we need to understand the basics of how Facebook works. Put simply, when you post content, it shows your content to around 10 per cent of your likers. And then depending on how much engagement that content gets (in the form of likes, shares, comments and clicks), the reach then increases accordingly.

As a celebrity, Jeremy has a few advantages to many in that he is ‘known’ and so can attract likes and engagement easily. And as such, my analysis of his page is that he can quite easily and consistently reach 100 per cent of his likers just put posting something simple now and then, such as a link to a new post on his blog for example. But getting his page to 82x his likes takes specific strategies which all of us can learn from.

Without giving away all of our secrets, here are a few clues!

Content, content, content. Take a look at Jeremy’s FB feed and you’ll see the mix of content that is created, whether that’s photos, panoramic photos, photos with quotes and text overlaid, video, timelapse video, videos of Jeremy miming to songs (!), 360 degree videos, links to posts on his blog…. Jeremy works hard at his page and the diversity of the content keeps people engaged and entertained.

Video. Last July when Jeremy was just getting into FB, he happened to meet someone from FB at an event, who put us in touch with a key person at FB’s ‘entertainment department’ (who knew they even had one!). Anyway, this person stressed to me, and this came straight from the horses mouth down the batphone directly to my ear, that native video, that is video uploaded straight to FB not linked in via You Tube, is something FB wants people to do and as such native video is being rewarded. Luckily Jeremy isn’t shy and immediately started filming selfie videos on his iphone talking about anything and everything. A particularly popular video in those early days was Jeremy pondering over his inability to resist chocolate in the evening. And the reach increased.

Behind the scenes: Buffer are a huge organisation that have blogged publicly about how behind the scenes photos of their teams increases engagement and reach on FB and this is definitely the case for Jeremy. He shares a LOT of behind the scenes photos and videos of his work and day to day life, whether that is him bumping into Susanna Reid in a corridor at the BBC, or getting a student at Cambridge University (where he was talking at an event) to talk him through a diagram on a wall that he doesn’t understand. He also often brings in all the different people who work on his shows from runners to producers and gets them to talk about what they do. Jeremy’s fans love that he appreciates everyone involved in his job and that he bigs them up on social media, and that they get to see him being completely natural with the people around him.