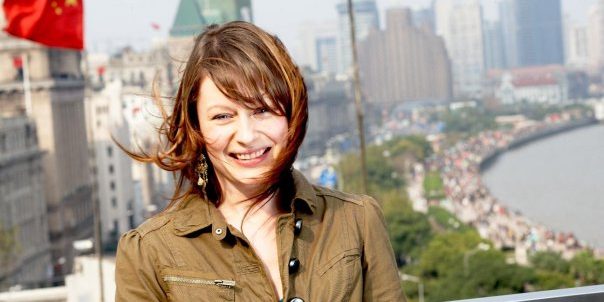 Ah, our 20s. Some of the most fun and carefree times of our lives.

And a natural result of total distraction with social and love lives is waking up somewhere close to 30 and finding yourself thinking ‘Erm, can someone remind me why I am even a doctor/teacher/lawyer/insertyourprofession here after all’.

So what happens if you chose your career when a teenager before you even knew yourself, or drifted into it aimlessly after university never considering that it might actually end up what you do for the rest of your life?

How do you change career at 30, just as the serious – and costly – stuff (think marriage/kids/ mortgage) is on the horizon? (That’s me in the photo, in Shanghai for Glamour magazine, heading towards 30, just before launching my own business)

And what should you do about the little voice in your head that tells you you’ve left it too late, that you can’t afford change, that you’ve made your bed and now you’d better just lie in it.

Recent research found 91 per cent of millennials expect to say in a job for less than three years, meaning over a lifetime they might have 15 – 20 different jobs. Psychologist and author Dr Marcia Reynolds also stated how it’s normal for women to reflect on their career and life choices as each new decade approaches, with the dawning of our 30s often resulting in a drive to focus on long term happiness over short term gain.

Personally, I know person I was at 19 was completely different to the one I woke up to at 29, as evidenced by the fact my 19 year old self was dead set on a career in the police force, while my 29 year old self had just left an 8 year career in journalism to launch an online business. And at 39, I’m a different person again.

Recognise that you don’t have to hold yourself hostage to a path you took, or decision you made years earlier.

That said, as 30 approaches, you may well have proper financial commitments, not least the rent.

Try saving three months salary in advance and if you’re thinking about getting a mortgage, then get it now, while you’re still in regular employment and go for a 5 year deal so that you have time to gain traction before having to prove your income again (a mortgage company will generally ask for 3 years account for self employed applicants).

Or follow the route of blogger Kat Williams, who now has a six figure income thanks to her hugely popular blog and print magazine ‘Rock N Roll bride’. Kat had fallen out with her old job as producer on a TV shopping channel, but decided she couldn’t quit her old job until she was making a similar amount of money from her new one.

That gave her plenty of motivation, and she made the switch gradually, going part time on her job until she was able to quit fully and focus her attention on her now extremely successful venture.

There’s a school of thought in the Western World right now that all you have to do when starting a business is follow your passions and you can somehow turn whatever it is you love into a business. Well, I’d like to inject a lone voice of caution into the wind here.

Of course, it’s very tempting to base a business purely on what you love, but I very much doubt the likes of Branson make decisions purely on a feeling inside their heart – they weigh up risks and opportunity at the same time.

Yes, you want to love what you do but you also need to look across all your passions and interests (most people have more than one!) and take a calculated and well thought out decision based on where opportunity truly lies.

A lot of people feel their heart sinking when they think about networking. Instead, see it as a way of spreading the word that either you’re looking for new opportunities or you have a new venture you’d like to tell people about.

A case in point is that of Carrie Green, founder of the Female Entrepreneur Association, a learning platform and online hub for women in business which supports thousands of women around the globe.

This was borne out of a vision Carrie had in 2011, and started as a simple website. At the time, she was running a different business, unlocking mobile phones, which she had fallen out of love with.

When talking about the success of the FEA and how she got her idea off the ground, she says: ‘I networked like a crazy person and built momentum by taking massive action. I googled networking events to go to, found a list of them and started going along to them. I soon started to build up group of people who knew me and supported me.’

Burning desires for change are difficult to ignore, even when you don’t know exactly what you want to do. But sometimes you just have to take the plunge.

Carly Rowena is one of the UK’s leading health and fitness vloggers: she’s managed by Gleam Futures (who also manage the likes of Zoella thank you very much!), and has worked with brands like Nike, Adidas, Sweaty Betty, Sainsbury’s and Urban Outfitter.

Carly has definitely found her calling, but all she knew at the time she quit her job in marketing for a car brand was that she didn’t want to do that for the rest of her life. She started making Youtube videos filming her workouts and thoughts just for fun.

Now, she not only does she have a huge monetised audience of hundreds of thousands, but is a fully qualified personal trainer serving clients around the globe.

There is a brilliant saying about motherhood ‘The days are long but the time is short’ which is acutely relevant here.

Look at it this way. If I say to you yes, you can make the change and in 2 years time, you will be leading a very different life, your initial thoughts might be ‘TWO YEARS? THAT’S WAY TOO LONG, I CAN’T RISK IT.’

But time goes by in a blip.

When, in 2 years time, you’re gazing over your new life, you’ll look back and think ‘Well, everything is completely different now and it only took 2 years. I don’t know what I was worrying about.’