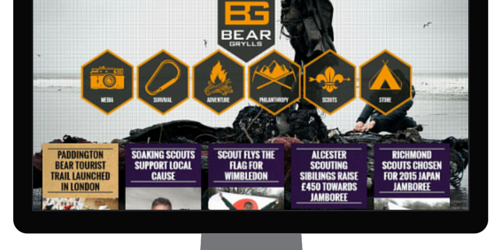 Bear Grylls: adventurer, writer, author and television presenter. Not only surviving in the wild, but thriving, it appears when it comes to his website.

Bear Grylls has a staggering 500,000 people on average Googling his name each month. And recognising an opportunity, he responds to searchers with this fantastic website.

Most people know who Bear Grylls is, but what is clear the moment you hit his site is how much more he is than whatever you imagined or knew about him. You don’t even need to scroll to realise that yes there’s the adventure stuff but also there’s charity work, boy scouts, fitness training, books and even an online shop selling Bear-branded products.

His blog appears to be regularly updated with positive publicity stories about him but it’s not all about him. There also some nice general stories about issues he’s interested in and groups he is involved with (ie, boy scouts raising a few hundred pounds here and there). Clever removal of the date from his blog posts keeps the content evergreen. And if you fancy something to watch, well, there are endless endless videos.

And just in case you began to think Bear must be unobtainable or take himself too seriously, a really lovely chatty contact page brings the whole thing back to earth and explains in the nicest possible way that no, Bear won’t be getting back to you or speaking at your school event. And this message, despite being negative, is given in such a friendly manner that it’s hard to imagine anyone would feel anything but compassion for Bear that he simply doesn’t have enough hours in his day to do all these things he wants to do! (ok, well he probably doesn’t want to speak at your school but somehow you’re left with the impression that he does).

I landed on Bear’s website and ended up browsing around for a good ten minutes. And during that time, Bear (someone I didn’t really have a strong opinion on) went up and up in my estimations. Heck, I’ll probably watch his next programme now simply because his website has made me engage and connect with him, which previously I’d never done.

1. Dazzle visitors with ALL you do

People look up to high achievers, especially those who excel in lots of different walks of life. Bring in as much information, images, content and your story as possible to really showcase your talents.

Viewers are said to be 85 per cent more likely to buy, book or connect with you after watching a video. How much footage do you have of yourself? Break it down into as many visitors as possible to make your site stick and keep browers on it.

Why not? If you’ve got traffic hitting your site (and Bear has potentially half a million visitors per month) then sell them something. People are googling your name, a shop is one way to monetise that search.