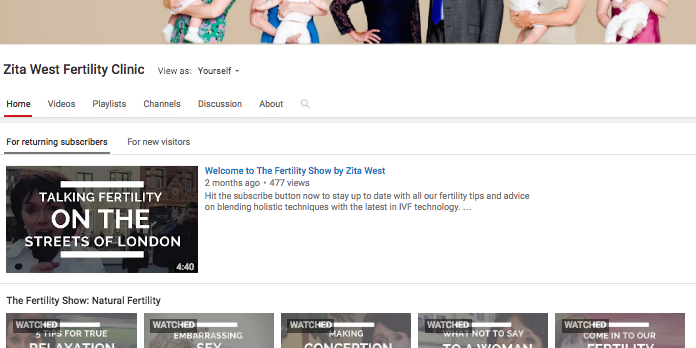 Video, video, video, everyone everywhere says it’s all about video right! And certainly we live in a world in which there are huge opportunities on Youtube, mainly because

b) Most businesses and individuals are scared of video and scared of Youtube, or don’t truly understand how to make it work, which means the chances are there are less of your competition doing video than there are other elements of digital marketing.

Since the end of last year, I’ve been working on building a branded, themed Youtube channel for the Zita West fertility clinic, and now, some 30 videos in, we are beginning to see the results. The channel is still in its infancy, but we’re already hearing at the clinic how clients are enjoying the videos.

At the same time, I’ve spent the last month talking to some of the world’s leading ‘vlogstars’ including Lily Pebbles, Evan Carmichael and Grant Cardone as I’ve been researching and writing my book, The Million Dollar Blog.

Look, there are plenty of people who film selfie style videos using their laptop and say it works. But I’m going to say that looks crap and isn’t worth doing. What I’m seeing is quality going up on Youtube though, with many bloggers, vloggers and business owners producing videos that are like mini programmes in their own right, nicely filmed, with great sound and opening and closing credits. Take Grant Cardone, the hugely successful American entrepreneur, speaker and author (who through business and property is worth $350 million). He runs a Youtube channel here https://www.youtube.com/user/GrantCardone and has published over 2000 videos. He has built a proper studio and set in his offices for filming his videos.

2) Your first videos will be bad – just accept that!

My first videos were awful – I was so shy and monotone. I sound like I’m reading from a script.

Entrepreneur Evan Carmichael (who has published over 3000 videos on his channel) told me:

If you look back at my channel, I sucked at the start! It took me 700 videos, until I wasn’t embarrassed by myself. I couldn’t watch my own videos back.

Of course, it’s easier to produce quality videos if you use a film crew and producer who are used to guiding you on camera. I know with Zita West, I keep an eye on what she is saying and ensure the videos make sense and give a clear message, but still, early videos will not be that great. And why should they be? Chances are, you’re not a TV presenter. It takes a while to relax when being filmed. The good news is that you will have fewer views when you start out than you’ll end up with if you persist. So forget being a perfectionist and just start publishing.

3) There is a real cost to video

Properly themed Youtube channels of the sort that people subscribe to and watch each episode can not be done cheaply. There is a real cost involved with video, either because you will need to pay for someone to film and edit your videos (and possibly equipment such as lighting) or because you yourself will need to spend time setting up, filming and editing your videos. And there are certain frustrating time considerations, especially in terms of uploading and downloading video footage for editing and then uploading finished videos to Youtube.

So set your mentality to accept and understand this from the off. If you want a proper growing Youtube channel, then there will be a financial or time investment in it. But when you have a popular channel and your competition don’t, that will have been well worth the effort.

Look, one video is fine if you just want a nice video you can pull through to your home page of your website as a single showcase or peek behind the scenes. One video is better than no videos – the stats say something like people are 85 per cent more likely to make buy, book or connect after watching a video. But one video will not lead to Vlogstardom, or your business stealing a march on Youtube. Neither will 20 videos or even 30.

The American vlogger Marie Forleo said she posted videos each week for a YEAR before even considering whether it was working or not. Most ‘Vlogstars’ post multiple times each week and cumulatively, over years, see huge results as it is the ‘lifetime’ views a video gets that really matters, not how many it gets on the day or week or even month that you post it. Just as with any element of self promotion or marketing, whether that is blogging, publicity or speaking, doing it once is a step in the right directions, but the real effects are seen from doing it over and over again, and doing it consistently.

Look at any vlogstar, or business vlogger that is actually doing video brilliantly, and you will see their videos are all neatly designed with covers, and most importantly, as I have just discovered having just REDESIGNED all of the covers for Zita West IVF Clinic Youtube channel, is covers that can be read, appeal and draw in clicks and views whilst in the sidebar results only.

You see, if someone watches a video about fertility that is not on our channel, then Youtube, in its right hand sidebar, will display a load of ‘related videos’ which that person might also enjoy which will hopefully include our videos. This is where the cover design is so important, as you want your video to really stand out and be obvious exactly what it is from the sidebar whilst just being one cover amongst a ton of other covers from everyone else on Youtube.

I have just redesigned Zita’s video covers to look like the below. This cover look is all about pulling in people who might see them in the sidebar but not necessarily know her brand.

And below, you can see an example of the Youtube sidebar, and how Zita’s videos begin to stand out and make it immediately obvious what the video is about and so draw in an interested audience because of the cover design.

6) Videos bring their results for years to come

The best ‘vlogging for business’ story I’ve ever heard came from Graham Hunt, the owner of Spanish estate agency Valencia Property. He began blogging and vlogging to help his business when it was in deep trouble and the results have been rather extraordinary (he spoke to me for my book, The Million Dollar Blog). He filmed 100 videos over 4 days, based around the idea of ‘100 tips for moving to Spain’ and uploaded them one at a time for the next 100 days. That was in 2010. Today, 6 years on, every client he has tells him how they have watched his videos.

Estate agents have a bad reputation because people don’t like or trust us! With the videos, my customers are not meeting me cold. They can see my face on the videos and decide before they come if they like me, whether they trust me and if they want to spend time looking for property with me. They can see I won’t be suited and booted like a lot of other agents in the UK, and they arrive feeling as though they already know me.

If you’re already blogging and on other social media platforms, as Facebook and Twitter, you might be wondering whether you need to do video too. All I can say is that the most successful, and highest profile vlog and blogstars that I’ve talked to for my book are across everything.

As Grant Cardone puts it, when asked why he creates all sorts of content for his websites and social media, including his own radio and Youtube shows

So there you have it – an overview of considerations, facts, stories and experiences about setting up and running a successful Youtube channel.

What is really clear though is that anyone else’s fear of Youtube and video, whether that is the technical and practical side of editing, or the simple ‘putting yourself out there’ element of video, is to your advantage. Most people have no idea how to do video, let alone edit video, or what to say on video. There are so many individuals and businesses out there who would do brilliantly on video, but either get started, do one or two videos and then never come back to it for all sorts of reasons.

For those who either learn how to film edit, or are willing to bear the cost of paying someone else to do this, and who take a long term view and understand that as with everything else, whilst success doesn’t happen overnight, success is yours for the taking!